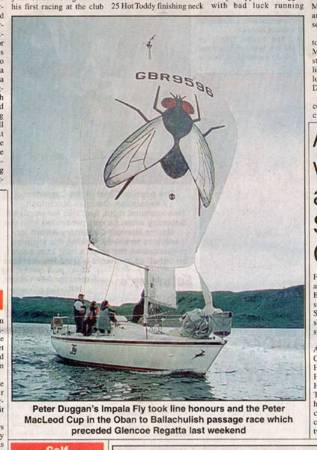 Photo from the Oban Times

So it was a patchy race (parking lots and following breeze) from Oban to Ballachulish Bay on Friday afternoon and all the faster boats (including us at tenth!) were down the pan on handicap, but the day was saved for Fly at the last moment when she caught the magic puff to carry her through the last few yards and become the first GBC boat in many years (ever?) to take the MacLeod Cup for line honours. Nice to see off both Farr Out and Vaila in the same race, even if it was ultimately a bit jammy but, as the first boat to fly the kite leaving Oban and the first to set it again at Shuna, nobody can say we weren’t trying! Big thanks to the ‘Amber Haze’ crew of Eric, Danny and Gordon who worked so hard for it and came out to play again on the Saturday with the addition of Susan and Janice. Fourth out of four in Saturday’s fast class might not sound too glamorous, but they were all good boats and I’d probably have settled for finishing in front of Vaila twice over the weekend if I’d been offered that before it all started...