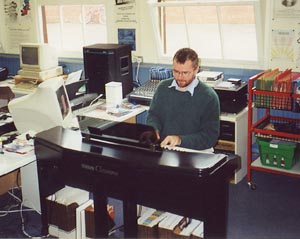 ‘Can’t you play something else, Sir?’

As explained on my home page, it’s school music teaching that paid the mortgage. My main place of work was Kinlochleven High School, but I’ve also been long-term visiting music specialist for several primary schools and done some work at Ardnamurchan High School.

Music, as far as I’m concerned, is music (a statement of the obvious, but sadly necessary when it’s so often forced into league tables like football teams), and I’m simply not prepared to say that one kind is ‘better’ than another! My tastes are eclectic, but my main interests (judging purely from the balance of my CD/tape/record collection) are probably:

To be honest, however, even such a vague listing seems too specific, and rock, pop and world music get a fair crack at my hi-fi too. Some music (irrespective of genre) is intrinsically great, some is made more by its performers, but the best is probably both intrinsically great and superbly performed. So I’d listen to some folk singing the telephone directory (well, perhaps!) and avoid others no matter how good their material, but I’d be the first to acknowledge that there’s a place for music of all styles and levels of creativity. (Thank goodness for a world enriched by diversity and personal taste as well as some consensus about what constitutes ‘greatness’!) Best of all is probably good live music of any genre, but it’s not always possible to have that on tap...

I’ve played recorder, whistle, flute, piano, accordion, guitar and bass fairly seriously for many years, more recently adding Scottish smallpipes (started March 2012) and border pipes (August 2013) as well as continuing to try further instruments with anything from serious intent to optimistic curiosity (eg bought a pBone September 2012, but pretty well just blew it a few times and put it away till a renewed bout of interest drove me to start treating trombone seriously with a new Yamaha 354 in November 2015!). I’ve written a fair amount of my own stuff (no particular genre!), some of which has been recorded at Watercolour Music in Ardgour. And I work constantly with computers, where sound recording, MIDI and score-writing have become the triple pillars of so much that I do.