Minor changes to my useful links for HTML and web design. 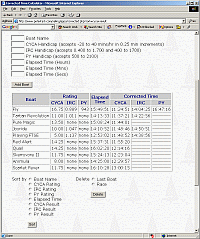 My CYCA, IRC and PY Corrected Time Calculator has finally reached the stage where I’m prepared to upload it and let folk play with it, so it’s joined the CYCA to PY Handicap Converter (now updated to calculate CYCA TCFs to three decimal places instead of four) in the Sailing Applications section. I’ve also redesigned the lower part of the Sailing Home Page to accommodate more links, rearranged the Music Home Page to bring the photo and links to my own scores and recordings to the top and added a spectacular series of sunrise photos to the Photo Gallery.

Some major changes are starting to take place both upfront (eg the relocation of ‘Flypaper’ to http://www.petestack.info/flypaper/) and behind the scenes (I’ve signed up for a reseller account with a new host because my old host — where I was looking after four sites — seemed to be losing the plot).

To go into a little more detail, this is probably the start of a split between petestack.com (for web design/hosting for folk I know + any theoretically professional musical activities) and petestack.info (for the more personal stuff). If I designed your site, I can host it (and will consider hosting other suitable sites), but don’t expect to see a ‘Pete’s Hosting’ site as such online because I’m neither planning to sell space to folk I’ve never met nor make a million at this game!

If nothing much else appears to have been happening recently on the ‘Petestack’ front, I’ve also been heavily involved in the creation and March 2003 launch of Pixelparity, which is a friendly new graphics forum started in partnership with my Canadian friends Risto Klint and Wayne Forcier.

Currently updating presentation of images to leave some breathing space between them and the surrounding text. Sorry if you’re still using Netscape 4.x, because it’ll now stick the text below the images instead of floating it round them! In properly CSS-compliant browsers, you can see the difference in the way it’s floated to the right (or left, on many pages) between:

this way (the new style).

and this way (the old style).